My past three days (Feb. 9-11) were spent roaming the southernmost regions of Sweden with my Sustainable Development class of 21 students. I'll keep this short. Here's a breakdown:

Thursday we went to Malmö, oft considered Copenhagen's sister city. They're connected by a giant bridge. It wasn't a very picturesque city like I've come to expect from pretty much every single place on this continent; it more reminded me of Cleveland. Did you know I love Cleveland? Yeah, I'm pretty sure my whole first post was on that.

In Malmö we saw the Scandinavian Green Roof Institute, which was actually a white roof institute because we decided to go in February when it was -8ºC and snowy. I'd post pictures, but you'd actually just be looking at a photo of a roof with snow on it, so I won't.

Next we ate lunch at a restaurant called Salt & Brygga. It was voted the most organic dining location in the world. Don't ask me by who, I'm just really trusting that the owner was not lying to us.

Later in the day we toured the region on our bus and observed the 2nd largest photovoltaic cell in the country, located on top of a maternity hospital. I will show you a picture of that. Here is a picture of that:

Friday we visited an after school center for preschool kids that was focused on perma-culture, sustainable farming, and pretty much everything else that I'd want in a place that I'd want to send my children to. They recently installed a station to practice blacksmithery. That's a word, don't look it up.


They had lots of cats. This is a picture of me petting two cats:

Later we visited a biogas plant where we learned the town of Kristianstad only puts 1.5% of their waste into landfill, the rest going to biofertilizer and biofuel for cars and heating. The guy was super biased since he worked there, and more than anything he left me curious as to the negatives of the practice. There's gotta be some, I'm just sayin'. I won't bother with a picture of that. If you want illustrations then go read a Maurice Sendak story. Christ. (I recommend Where the Wild Things Are).


That night we visited Bäckaskog Slott, a castle, where we went on a ghost tour and had dinner. Here is a picture of my dessert. Yeah, I know, the Maurice Sendak thing from literally three lines up, but it was really delicious, okay?:

Today we stood out in the -10ºC cold for a while and learned about how the city of Kristianstad was at the bottom of a lake basin because humans decided they needed more agricultural land to make vodka.

Then we went curling. This is me curling: 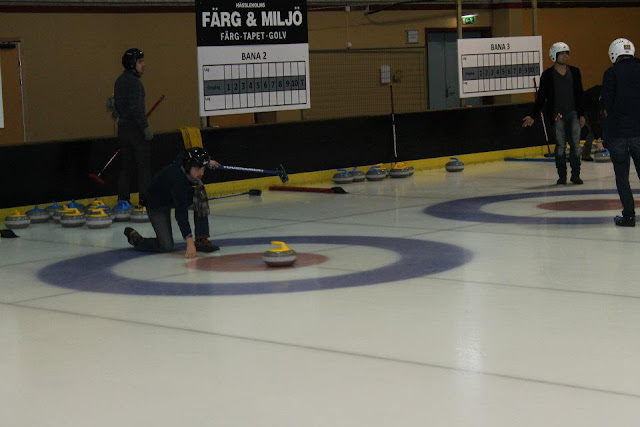